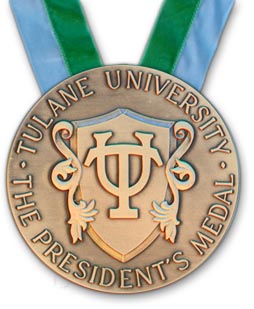 President Scott S. Cowen established the Tulane University President's Medal in 1999. The medal is awarded at the sole discretion of the president to individuals who have distinguished themselves by their actions and who have contributed in some manner to the well-being of Tulane University or the city of New Orleans. Unlike the honorary degree, this award may commemorate deeds other than academic achievement. Designed by Professor Emeritus Franklin Adams, the front of the medal features a sculpted TU symbol. This university emblem was first used as an architectural symbol on the exterior of two historic buildings on the uptown campus, Tilton Hall and Robert C. Cudd Hall.

* On behalf of the New Orleans Saints organization